Chirk A.A.A. F.C. are one of the oldest clubs in Welsh soccer history having being founded in 1876. Chirk are founder members of the F.A. of Wales and to this day remain full members. Between 1886 and 1894, Chirk were winners of the Welsh Senior Cup on no fewer than 5 occasions. In 1893, Chirk again reached the final only to lose to Wrexham in a game played at Oswestry. 1894 was the last time that Chirk reached the final of this competition. Chirk also featured in the English Cup. In 1887 and 1888 they were only 4 games away from the final losing to Darwin and Derby respectively. The man behind the villages success was T.E. Thomas, headmaster at Chirk School and a man reputed to have introduced 49 future Welsh internationals to the game.

In 1894, Chirk, with the legendary BILLY MEREDITH in their team, reached the semi -finals of both the Welsh Cup and English Amateur Cup. Unfortunately the dates of both games clashed and the Welsh F.A. ordered Chirk to play the Welsh Cup tie.

The early Chirk teams were mainly composed of miners from the two now closed village coal mines. The Chirk sides soon gained the “Colliers” nickname which has lasted to the present day and is a fitting and proud link to our successful past.

The first half of the Twentieth century saw Chirk compete in the Welsh League, Combination League, Liverpool Combination League and The Welsh National League where they have played since 1945, the only exception being when they spent one season in the Cymru Alliance in 1997. Chirk won several domestic honours in the early part of the century but they failed to gain any success in the National competitions. However, in 1953, Chirk won the Welsh Youth Cup beating Aberystwyth 2 – 1 in the second replay. Many members of this side were playing when Chirk won the Welsh Amateur Cup for the first time in 1959. They went on win this trophy on a further 2 occasions in 1960 and 1963. 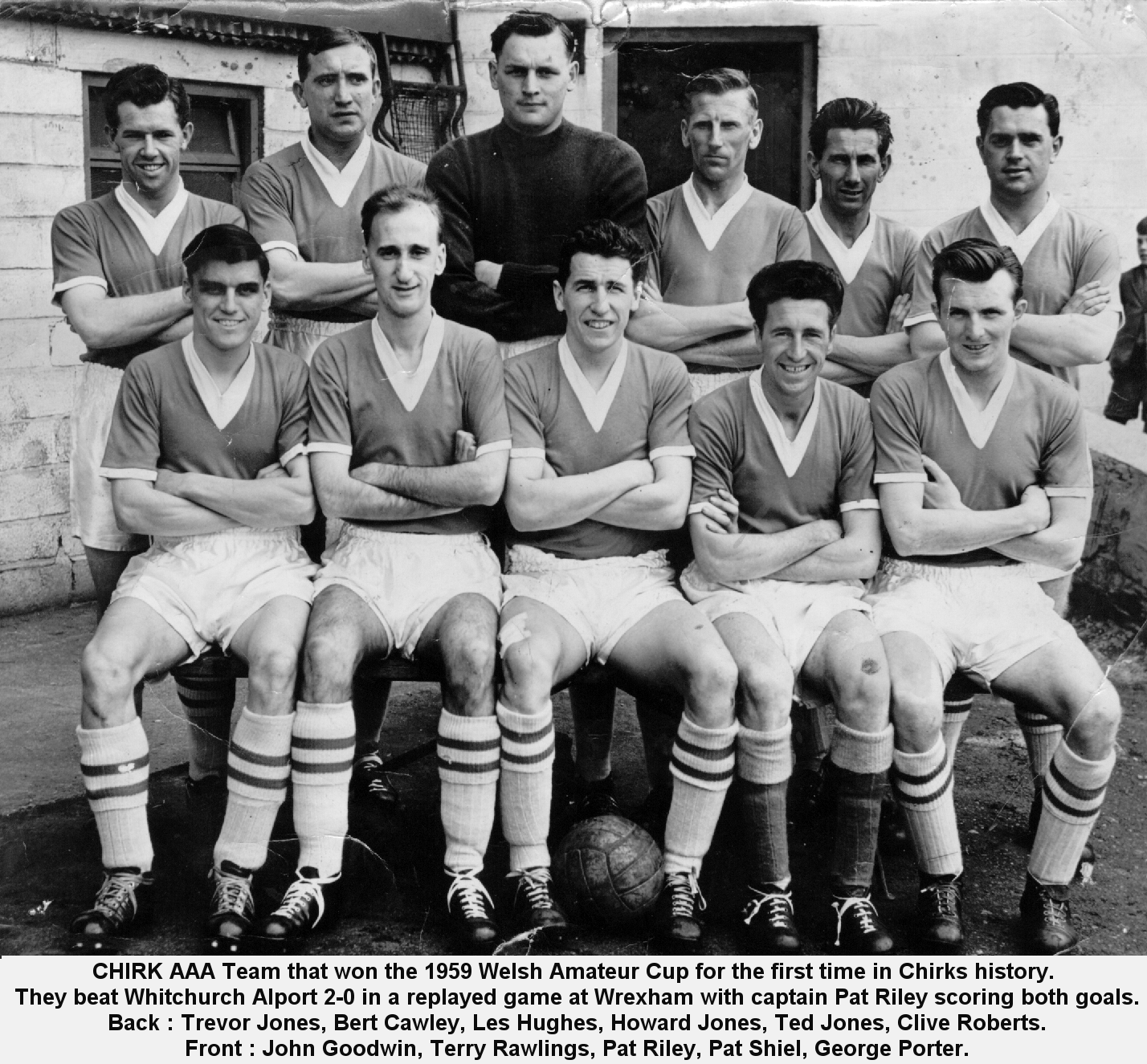 During the 70’s & 80’s Chirk were League and Cup winners in Division 2 in 1978/79 whilst also winning the Horace Wynn Cup.  Manager John Green returned to the club in 1983/84 to help Chirk win their first Division 1 Championship.

In 1995, the club were in trouble and almost folded. An extraordinary meeting was convened and the closure was avoided. A new committee was formed and former players Clive Roberts and Phil Jones were appointed as team management.

The club reformed their reserve team at the beginning of the 1996/97 season to compliment what was building up to be a strong first team squad. The season’s main aim was to achieve promotion to the Cymru Alliance League.

Chirk achieved their aim by finishing runners -up to champions Wrexham Colts. An added bonus to the season was the capture of the inaugural Carlsberg Pub Cup Cymru.This magnificent trophy was won in a thrilling 2 -l victory over Swansea side Bath Hotel to make Chirk National champions yet again. 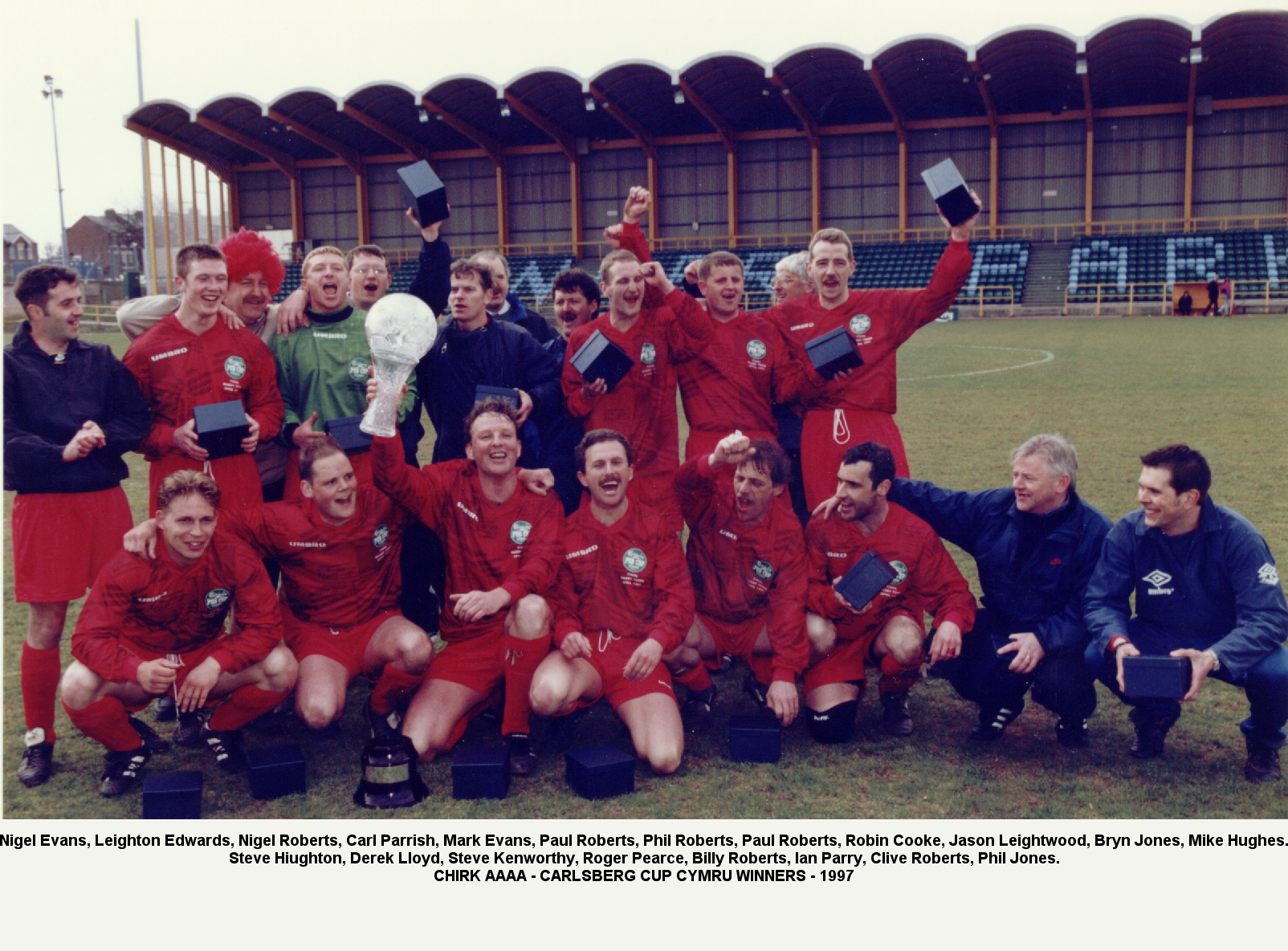 On their return to the Welsh National League, Chirk appointed Mike Hughes and Dudley Hall to be the management team. Chirk went on to finish 4th in the league whilst capturing the league cup on the way.

Midway through the next season, Chirk appointed goalkeeper Carl Parrish as their player-manager. Carl made a good impression and guided the team to a midtable position after a poor start. The 2001/02 Season saw Chirk finish in a healthy 8th position.  A Reserve team was also formed under the guidance of former players Paul Roberts and Nigel Evans where they finished runners-up, gaining promotion to Division two as well as being losing finalists in the Third Division Cup.

The 2002/03 season was a disappointment, we were knocked out of every cup competition in the first round and finished in a miserable 12th place, as well as having the luxury of three first team managers.

The 2003/04 Season saw Ryland Roberts together with Assistant Alan Reeve’s take over the reigns.  This had immediate affect with us finishing in sixth place and winning the W.N.L. Premier Cup, the fourth time we had lifted the trophy in 15 years.  Our Reserve side also gained promotion to Division One after finishing in an impressive third place under the guidance of Paul Roberts and Mark Holmes. 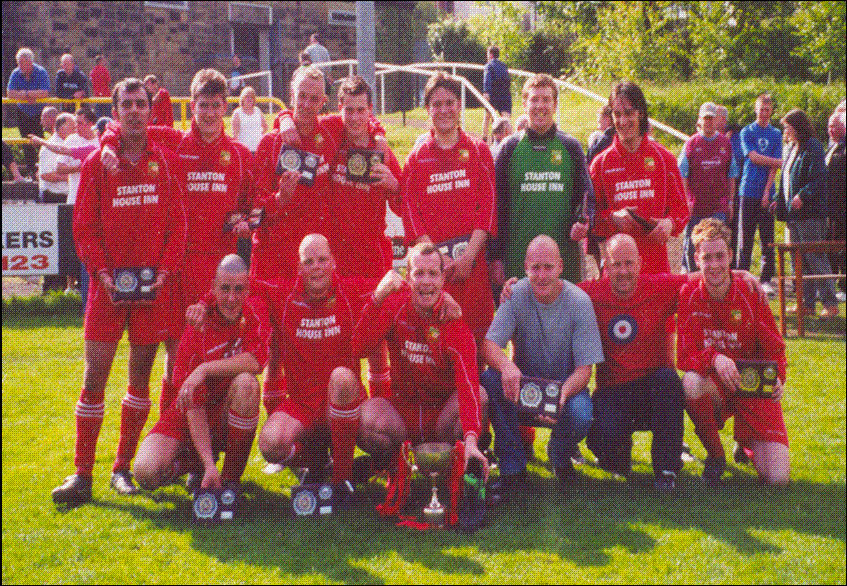 It was Chirk’s U19 Youth Team that grabbed the headlines over the next few seasons. The highlights were reaching the semi-final of the Welsh Youth Cup before narrowly losing to eventual winners Swansea City and in 2009 lifting the NEWFA U19 Cup for the first time by defeating Brymbo.

The promotion of Mark Holmes and Paul Roberts from Reserve Team Management to First Team supremos in 2009 had a positive effect and the following season they guided the side to runners-up position in the Welsh National League – Premier Division whilst also reaching the semi-finals of the North East Wales Cup losing to eventual winners Buckley Town.

In 2011 the club turned to Richard Williams-Cooke and Gavin Garrigan to lead their side. We finished in a creditable 3rd place in the league whilst also reaching the semi final of the NEWFA Cup losing to eventual winners Cefn Druids. Meanwhile Mark Holmes and Dave Griffiths led our Reserve team to the Reserve Division title – our first championship since 1985.

2012/2013 season the club re-appointed Mark Holmes as First Team Manager with Steve Birch and Dave Griffiths leading the Reserves. The First team took the title for the first time since 1984 and completed the double when they won the Presidents Cup defeating League Cup Winners Brymbo 3-2 in August 2013. 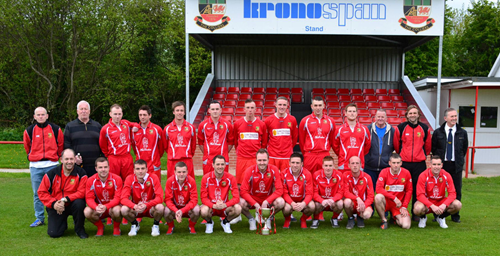 In April 2014, Chirk were beaten finalists in The Welsh Trophy when they lost 3-2 to Llanrug United in the Final at Rhyl.

Chirk were losing finalists in the 2015 NEWFA Challenge Cup losing to Mold Alex in the Final and runners-up to Gresford Athletic in The Premier Division.

In April 2017 Chirk beat Penlan 2-1 in the FAW Trophy Final at Aberystwyth to  win the trophy they last won way back in 1963 with goals from Matty Thomas and an extra time winner from Chris Bennion. 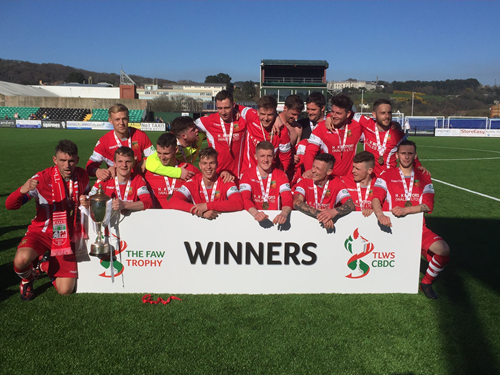 In 2019/2020 Chirks Under 19 team reached the final of the Welsh Youth Cup. Unfortunately the season was cut short by The Coronavirus and the competition was declared null & void! 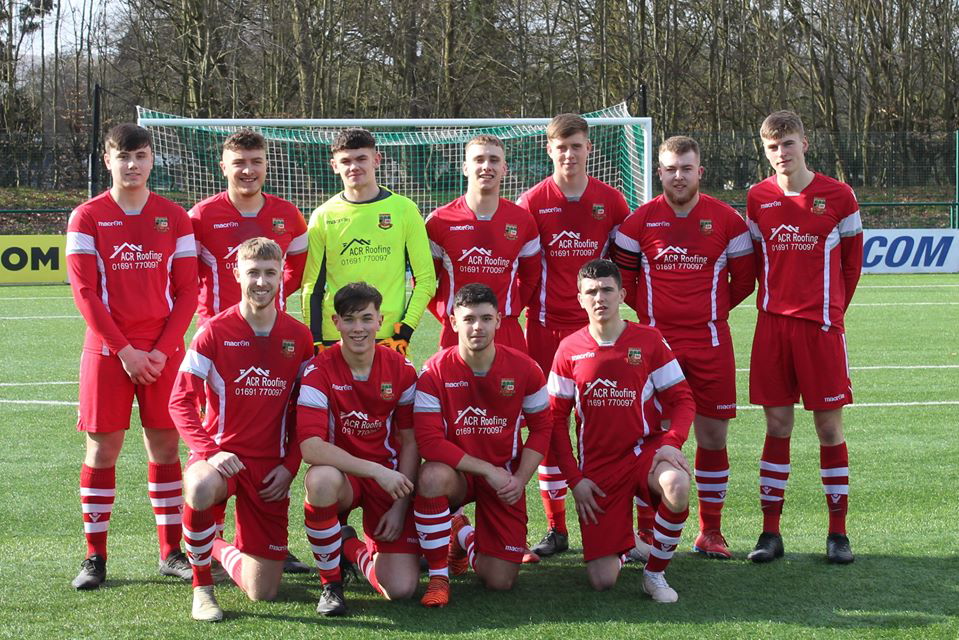 May 2020 Chirk appointed former player Andy Pryde & James Williams as their new Management team and although the first season was a washout due to the coronavirus, a strong squad was assembled for the 2021/2022 season. 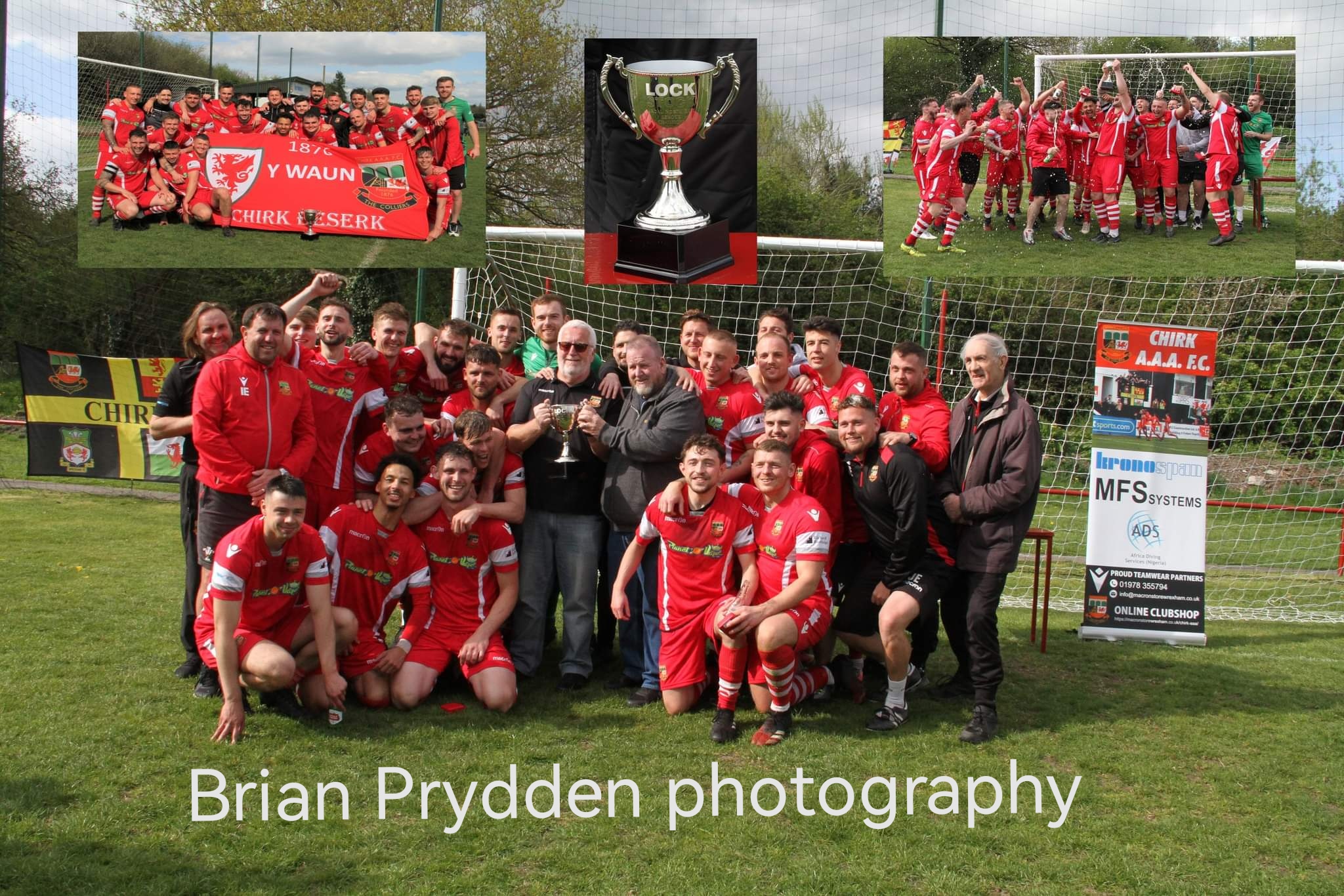 The Chirk AAA has been at the heart and soul of the community for many, many years and provides an excellent venue for football, cricket and bowls, as well as a social club with a cosy lounge, sports bar and a function room which can accommodate up t...

FAW Welsh Cup We've won it 5 times! Chirk have won the Welsh Cup on no fewer than 5 occasions. We first won it in 1887 when we beat Davenham 4-2. We went on to win it another 4 times in the following 7 years, the last time when we beat Westminister R...